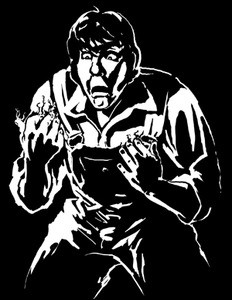 Wayne Marcelli was born in the hills of NY in 87. His family relocated to the south in 2000 where he began drawing. He first picked up a paintbrush in high school and has stuck with it since. A CCU graduate of 2010, Wayne is currently delving into digital media while preparing for higher education. Horror and its stylistic properties play a large role in his work.