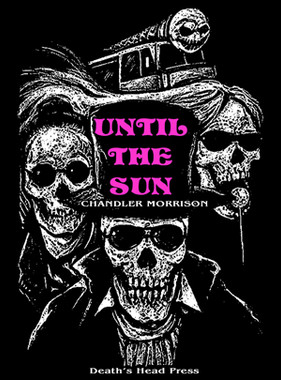 Until the Sun T-Shirt

About the book: On a hot August night, a troubled fifteen-year-old boy with a tragic past wakes to find his tyrannical foster parents murdered by a trio of nocturnal, blood-drinking heathens. The killers give him the opportunity for a new life, one where he can be relieved of traditional hardships, vanquish his enemies, and attain a sense of true belonging…at the cost of what little remains of his humanity. The life he is offered is one of eternal darkness, but the promise of undying acceptance, freedom, and power gives it an appeal that his current dreaded existence is lacking.

Fraught with resentment over his catastrophic adolescence and confronted by ambiguous notions of good and evil, he is forced to explore a dark world on the fringe between bliss and oblivion. As he edges ever closer to a climactic encounter with the demons that plague his soul, he discovers just how dangerous it is to be young and alienated in modern society.